Last month the final FLW Tour event took place at Lake Champlain on the border of New York and Vermont.  Crossed Industries Team Member Kyle Cortiana had finished the event and was on his long trek back home to Oklahoma when tragedy struck in Indiana.  A car entering the freeway lost control and hit the trailer of his Ranger Boat spinning his 2019 Tundra out of control and head on into the T-rail side of the highway four lanes over.  Now it’s all been said and done with the absolutely most important part of the whole endeavor, Kyle is recovering just fine with merely minor injuries – Thank God!  From the aftermath, it’s amazing how something as simple as an Iron Cross Bumper shielded Kyle in what could have been a terrible tragedy.

The stock bumpers on the Toyota Tundras are built much like the rest of the industry’s trucks.  For the most part they’re built to take some of the brunt of impact if and when it occurs.  However, it still is just chrome plated aluminum and is a composite of a number of different parts. While it’s “good enough” to pass highway safety standards, it’s still somewhat of a glass jaw just like most other modern pickups, including my 2019 Chevy which had to have a bumper replacement in 2017 for hitting a plastic drop in bed liner that was discarded on the Florida Turnpike.  So the bumper is essentially just another crumple zone and not exactly capable of shielding the force of the impact from the rest of the truck.

First, take a look at this image from the National Highway Traffic Safety Administration off set crash test of a 2018 Toyota Tundra (Note: No significant changes were made between 2018 and 2019 year models).

Prior to the 2019 season we had supplied Kyle with an Iron Cross Heavy Duty Front Bumper, P/N 20-715-14 along with a winch for his Toyota Tundra.  This was in hopes of him using it this upcoming hunting season to help hang tree stands or any other use he could get out of it.  Being a shield in a horrific crash was never even considered, but as it turns out, I’m glad it was.  The way the Iron Cross Heavy Duty Front Bumper is designed, it sticks out about 8-9 inches from the front of the grill to allow for access to the top of the winch.  It also is a HEAVY one-piece bumper which bolts directly to the main bumper mounts on the front of the frame, instead of being pieced together as is the stock Toyota bumper. 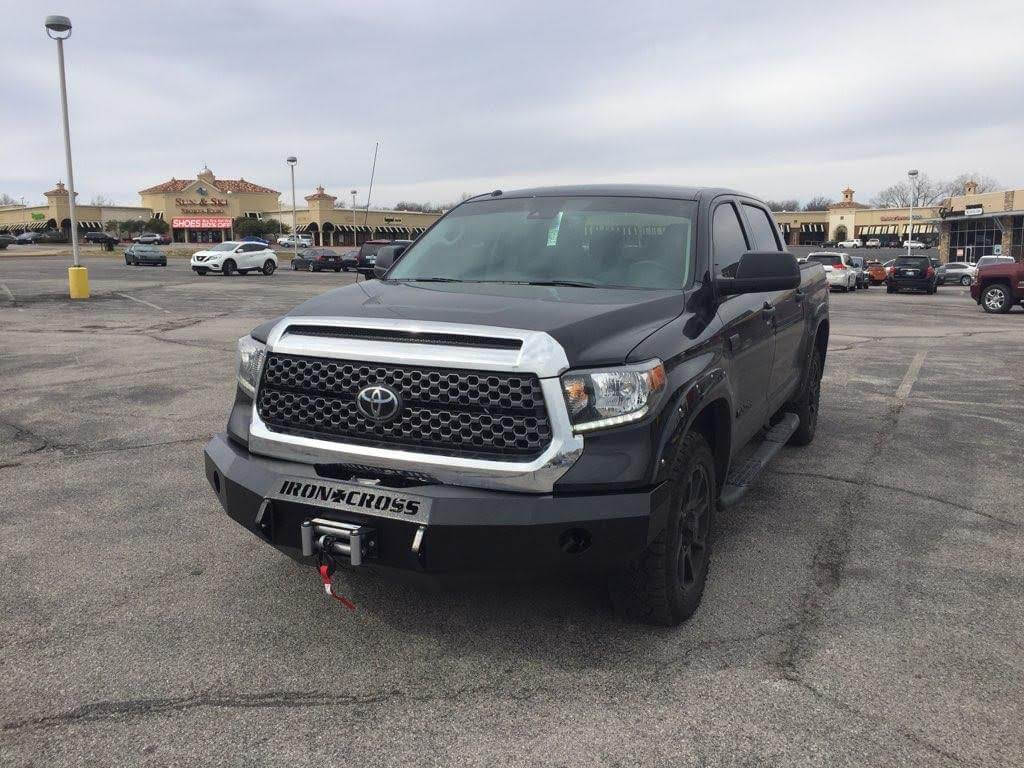 Kyle was on his way back home after cashing a check at the event on Champlain.  He finished his season, and was looking forward to getting on with the rest of the FLW Costa series along with his other love – HUNTING – this fall.  He was travelling in the fast lane on I-70 East Bound when a Nissan Pathfinder came out of control onto the freeway and hit his Ranger trailer.  This launched his Ranger off the trailer, and thankfully into a lane which was closed for construction.

The rest of Kyle’s rig went head on into the T-Rail on the right side of the highway four lanes over at what was probably greater than 50 mph (Note: This is merely an assumption as I have not seen any official police reporting, however from the description given by Kyle this is probable).  Kyle came to a stop with airbags deployed around him and some miner impact injuries from his seat belt.  What was amazing though, was how the solid one piece Iron Cross bumper was not pushed into the engine compartment, nor did the engine get pushed into the cab, but it was flattened as you’d expect a shield to be.  That American Made piece of steel had absorbed the impact of the concrete, making a solid barrier across the front of the frame of his 2019 Toyota Tundra.

Needless to say, these pictures speak for themselves.  This bumper made a world of difference in this accident and may have made all the difference in the world for Kyle being able to finish the year without any serious injury from this wreck.

I know it probably wasn’t the plan you had when you put that bumper on my truck, but I think it made all the difference in the world. – Kyle Cortiana

Aftermarket accessories are great for increasing the usefulness of your tow vehicles, but in the worst of cases they can also save you from a life changing event.  We’re glad Kyle made it through what could have been a terrible tragedy relatively unscathed.  With the amount of miles we all put on the highways, every little bit of reassurance that we’ll make it home is worth its weight in gold.